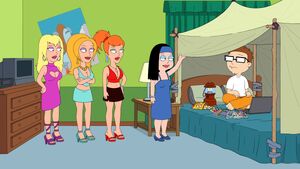 Zooey, Kristen and Danuta are three friends of Hayley's that she meets while eating out with the family at Boobers where Zooey works in "Faking Bad". Zooey invites her to go out clubbing with the girls, but at the club, she finds she doesn't have a fake ID to get in and is dumped. Going to see Steve who is a master at making realistic fake IDs, she talks to him about getting one and after her friend's IDs fail to pass muster, they go to him as well and show him their boobs when Hayley convinces them he is a real "Federal Boobie Inspector" based on his fake ID creation.

After Hayley and Steve have a falling out due to her friends laughing at him outside of the Gaza Strip where Kristen works and Hayley tries to pass herself off as the brains of the outfit, they pass by Jeff Fischer's van that they were using as a base of operations. Hayley jumps out to check on things, finding out that Steve and Roger are getting into passport forgery.

Zooey is a redhead, voiced by Mae Whitman.

Danuta is the blond in purple, voiced by Anne Gregory.

Retrieved from "https://americandad.fandom.com/wiki/Zooey,_Kristen_%26_Danuta?oldid=83493"
Community content is available under CC-BY-SA unless otherwise noted.