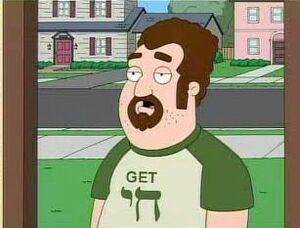 Zacharius Knight "Zach" Galifianakis (October 1, 1969) is an American comedian and actor, known for numerous film and television appearances including his own Comedy Central Presents special and in The Hangover series.

In "My Morning Straitjacket", he provides the voice of Norman and "heavyset man". He also had a voice credit in "The People vs. Martin Sugar".

Retrieved from "https://americandad.fandom.com/wiki/Zach_Galifianakis?oldid=63374"
Community content is available under CC-BY-SA unless otherwise noted.