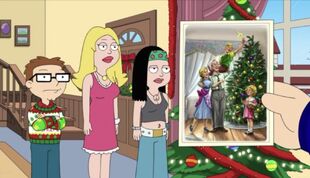 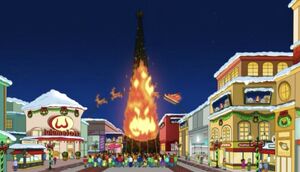 As Francine prepares to knock off the Thanksgiving leftovers, Stan throws them away and moves on to Christmas. Wanting something Norman Rockwell-esque, he tries to put a little holiday spirit in the family by taking them to a tree lighting festival, despite their desires to do other things. But when he sends them off to get some refreshments, he realizes he left his cell phone in the car and runs for it, nearly getting hit by a Christmas trolley in the process, but is saved by a janitor. Out of range, the lighting starts sooner than he expected as the Christmas tree lights short out and set it ablaze, killing most of the bystanders, including Steve, Hayley and Francine, while Roger is mauled by a polar bear and Klaus is stepped on while holding a space for the family. As Stan faces Christmas alone with Jeff, they split a fortune cookie where Stan reads a wish and finds himself back at the festival before things went wrong. He sets out to save the family, but gets distracted picking up a hot cocoa. He finds himself reset, and this time, he finds Steve in a computer store. However, it takes him several more attempts to locate Francine and Hayley. Realizing that they're too spread out to save everyone, he tries unsuccessfully to stop the tree lighting ceremony. 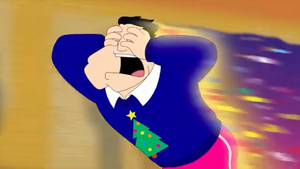 More resets follow as he realizes he should try to cut the power. But when he finally succeeds in doing that, a stay cable supporting the tree snaps and slices through the crowd, killing everyone just the same. As he commiserates his failure with a janitor who's been his point of contact with each reset, he points out that Stan's resets are running out and that perhaps Stan's real mistake is in mistreating his family for his 'perfect' Christmas. He decides to spend his last moments with each of the family members, getting a piercing with Francine and shooting some hoops with Hayley. He joins Steve in a computer store and offers to play some games, but Steve reveals he's there to stop a blackmail attempt, as the clerk hacked his computer and made a video of him masturbating. The clerk, believing that Steve ignored his demands to come alone, uploads the video on to every screen in town, including a giant one over the festivities. Appalled by the sight, the tree lighting is canceled and everyone is saved.