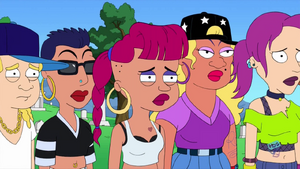 YoYo is one of the at-risk children in Mr. Deliver's class in "Stan-Dan Deliver".

When Steve is demoted to the class as punishment by Principal Lewis for charity candy that was eaten by Roger, he accuses Roger of being selfish. Roger appears in the class in the persona of Mr. Deliver to teach the kids who have only learned that all of their previous teachers have given up on them. When Steve refuses to buy into Roger's attempt at being positive, he frames him and gets him kicked out of the school despite actually reaching the students despite a protest by YoYo. Another student, Ricky, takes the news hard, but no sooner than he storms out of the class, than he is killed in a gang fight.

At Ricky's funeral, his classmates all speak up for Mr. Deliver, noting that he paid YoYo's tab at Planned Parenthood. Steve begins to believe that maybe Roger wasn't a complete fraud after all and gets him rehired, only to have him get all the kids enlisted in the Chinese army.

YoYo is a hall monitor in "The Hall Monitor and the Lunch Lady".

YoYo is voiced by Missy Elliott.

Retrieved from "https://americandad.fandom.com/wiki/YoYo?oldid=88710"
Community content is available under CC-BY-SA unless otherwise noted.