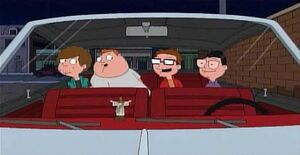 "Yah Mo B There" is an R&B song by James Ingram and Michael McDonald. It was written by Ingram, McDonald, Rod Temperton, and producer Quincy Jones. The song originally appeared on Ingram's 1983 album It's Your Night, released on Jones' Qwest Records label. It was released as a single in late 1983, peaking at #19 on the U.S. charts in 1984, and #12 on the UK charts in 1985.

Steve and his friends sing "Yah Mo B There" when they decide to strike out on their own when abandoned by Principal Lewis who leaves them in the car while he spends their gambling winning in a strip house in "Home Wrecker".

All: Yah mo be there (up and over)

Yah mo be there (up and over)

Yah mo be there

Toshi: Whenever you call

Retrieved from "https://americandad.fandom.com/wiki/Ya_Mo_Be_There?oldid=46775"
Community content is available under CC-BY-SA unless otherwise noted.