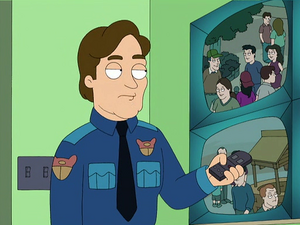 Orville Willis Forte IV, best known as Will Forte (born June 17, 1970) is an American actor, comedian and writer. He starred in the film MacGruber and also finished his 8th and final season as a cast member on Saturday Night Live ending May 15, 2010.

Will Forte provided the voice of the amusement park security officer in "Family Affair", Mayor Woodside in "Every Which Way But Lose", "fake Jesus" in "Rapture's Delight" and provides the voice of Henry Watkins in "National Treasure 4: Baby Franny: She's Doing Well: The Hole Story" and Charlie Greenfield in Morning Mimosa as well as an additional voices.

Retrieved from "https://americandad.fandom.com/wiki/Will_Forte?oldid=61469"
Community content is available under CC-BY-SA unless otherwise noted.