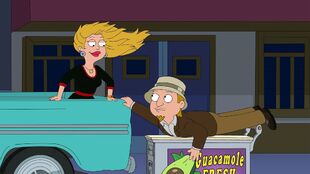 Wild Women Do
Jeff spends a night on the town with Francine. 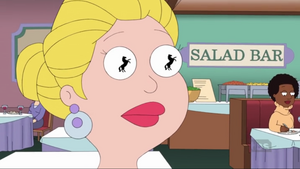 When Stan is accepted for a sleep apnea study, he leaves Jeff in charge of taking Francine out for the night. He provides him with detailed instructions to keep her under control, but these are mostly lost on Jeff. But when she finds out over dinner that she's being held back by Stan's instructions, she ditches Jeff to go wild. When he finally catches up with her, she convinces him to join her in going wild as well. 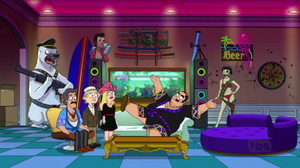 They eventually bump into Francine's drug dealer, who introduces them to his dry cleaner. However, his crazy habits frighten them and his playing around with a gun results in him killing himself. With their fingerprints on the gun as well from the horseplay, they worry about being accused of killing him. They call up one of Roger's personas to help fix things, but he makes it worse by calling the police. Francine's drug dealer bolts, leaving them behind. To get out of it, they decide to go wild again and dress the body up in one of his sundresses and drive away, pretending to be women going out for a night on the town. To get rid of the body, they go back to a country bar and stage a fatal 'accident' on a mechanical bull. 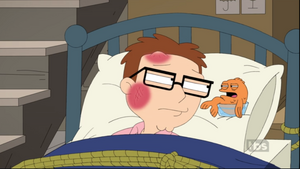 Meanwhile, after Steve blows off reading an email from Klaus of his celebrity impressions, he finds himself home alone, but injures himself during his celebration. When he awakens, he finds that his accident was caused by Klaus sabotaging the floor and has tied him to the bed, where Klaus forces him to watch all of his impressions. After 6 hours of torture, Steve finally starts to giggle. But his demands for more start to frighten Klaus, who decides to untie him and let him go. When he is freed, he turns around and ties Klaus to the bed instead.

Retrieved from "https://americandad.fandom.com/wiki/Wild_Women_Do?oldid=87528"
Community content is available under CC-BY-SA unless otherwise noted.