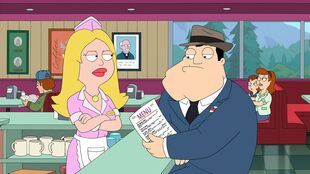 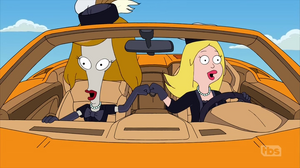 Stan dances in a sleazy motel in an attempt to place a microphone. Passionately kissing his target, his cover is blown and he leaps through a window during his escape attempt. Meanwhile, Steve and his friends head to the basement to wrestle while Hayley tries to deal with DIRECTV so Roger and Francine decide to play “Widows.” While shopping in the disguise, they score loads of free gifts and benefits. Getting a courtesy police car ride from St. Louis, they run into Bunny Sanders and find out that she is working a crappy job after Stan's co-worker Sanders was killed. The news depresses Francine until Stan arrives home. Between uncomforting words from Stan about the possibility of death, and Roger's comments about being poor, they trigger Francine's imagination again, making her scream. 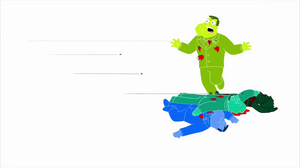 Back to their game when Stan leaves again, Francine takes her game in a new direction to prepare for a possibility of being poor and unhappy. Conversing with other widows in a support group, she realizes there is no bright side to being a widow. Following advice, she takes a job to get out of the house at a diner. Stan returns and Roger tells him of their game while working as a marketing agent thanks to a tip from one of the widows support group members. He forces Roger to take him to the diner where he is shocked to find her working such a job. Stan is appalled that she took such a job but Roger tries to explain it to him that she does it to help her cope with the possibility that Stan may actually get killed in his work. He has trouble buying into it and Roger is of no help. He approaches Francine on his own and tries to talk her out of her fantasy. He is sent packing, convinced that Francine has lost it. He finally begins to understand what Roger has tried to explain. Following his advice to play Francine's game her way, he pretends to be a widower. Francine is skeptical at first, although he continues the game, drawing her in. Winning her over, a robbery occurs. He takes them out and asks Francine to come home. She agrees, having seen him in action and is less afraid for him. 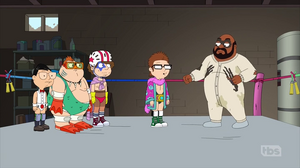 While they put on a wrestling show of their own in the basement, where it is all talk and no actual wrestling, Principal Lewis shows up to wrestle them for real for their "championship" belt. He abuses Steve and the guys, sending them to the hospital where they find him posing as a doctor to beat them again. Taking the belt, he challenges them to take it back.

Roger, having continued his persona of a marketing agent, finds himself in over his head, eventually wondering if he has revealed that he is an alien.