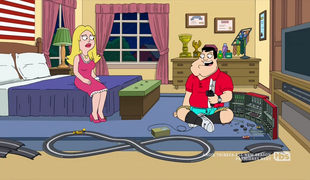 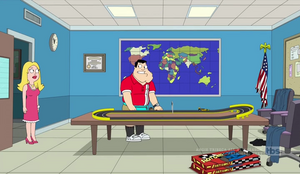 Stan appears to be spending a lot of time training a new female employee at work. Although when Klaus makes note of it, Francine brushes it off, but still gets hammered and consults imaginary friends who lead her to investigate further. As Stan calls in to report another late night, Francine is outside of CIA headquarters. She slips inside and finds him in his office, but as she is about to enter, she is found by the new employee Stan is supposed to be training. She brushes it off, convinced she will find them having sex in Stan's office, but when she kicks in the door, she finds him playing with slot cars.

As she tries to sort things out, she finds that Stan hid his new hobby to keep her from trying to stop him from going to a big tournament in Altoona. Between his new hobby and habits, she discovers he has become completely undesirable. After getting drunk again, she has another conversation with her imaginary friends who convince her to get him a make over, although she passes out on the way back to the bedroom. When she recovers, they go to the mall but the trip is a waste when it appears that Stan is beyond help and Francine despairs of Stan ever being his sexy self again. But at the airport for the tournament, Stan's racing partner turns out to be a sexy, flirtatious woman despite the masculine nickname of "Mel," which gives Francine pause. That night, she has a nightmare of herself with Stan and Mel, and awakens to Klaus bulked up on steroids. 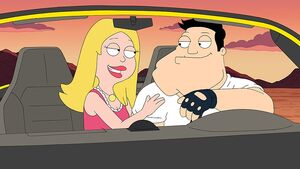 At the tournament, Stan is distracted by Francine's concerns about him as back at home, she finally has enough of bad advice from her "friends" and smashes her jar of homebrew. Determined to get her Stan back, she starts to leave Klaus in charge, but is not as sober as she thinks she is and falls into the pool. As Stan talks about his life with Mel, Francine calls but Mel tosses the phone away and whispers a naughty suggestion in his ear. Stan wins the tournament but feels bad about events the previous night with Mel. As Stan starts to check out of the hotel, he finds Francine at the door. He breaks into tears and confesses to cheating with Mel which starts Francine crying as well. As he insists they must get a divorce, his confessions turns out that he "cheated" by illegally modifying his car. When she sorts this out, she is happy to let things get back to normal and tells him she'll see him at home as he tries to stab himself with a mirror shard. 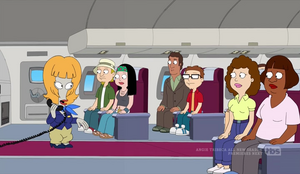 Meanwhile, Roger becomes a flight attendant on Southwest Airlines to perform comedy routines on planes. On a flight, he feels good when he gets a few chuckles, but completely forgets to perform the safety announcement and gets upstaged by Karen, another flight attendant. When Roger tries to make a retort, he insults the passengers instead and realizes he's been embarrassed. Roger invites Jeff, Hayley and Steve along for a free flight. Although they choose Hawaii, Roger insists they go to Ft. Worth with him to laugh at his jokes and top Karen, but his jokes fall flat again despite their attempts to laugh as they fear for themselves. Roger finally has enough of being upstaged and announces that he has sabotaged the plane. Yanking open the aircraft door, he gives Karen one last word that he "kills," but as he leaps from the aircraft, he finds they are on final landing approach and his parachute gets tangled in the landing gear. As the plane stops at the gate, he looks up and celebrates having gotten a laugh out of the passengers as they look down on his battered body.

Retrieved from "https://americandad.fandom.com/wiki/Whole_Slotta_Love?oldid=79063"
Community content is available under CC-BY-SA unless otherwise noted.