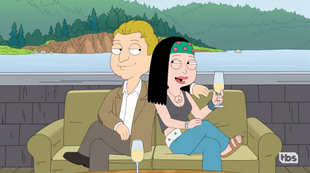 Roger's Disguise: Rabbit from "First, Do No Farm" 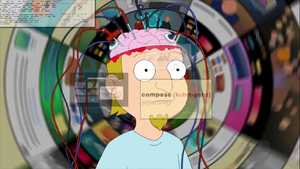 While out on a double date with Danuta and her new boyfriend, Marco, Jeff manages to embarrass Hayley, which results in a fight that night when Hayley calls out Marcos name during sex. While taking a walk to sort out his thoughts, he is picked up by Stan, who is collecting animals for a CIA project. There, he discovers another project has the possibility of making him more intelligent, so he signs up for it. Hayley tries to put a stop to it, but realizing this could actually improve him, allows the operation to proceed.

The operation is a success, although he is warned that marijuana could set him back. On another date with Hayley and their friends, Jeff is the hit of the party and Hayley finds their positions reversed. That night, she tries to slip him marijuana but is caught in the act. Breaking up, Hayley tries to date another moron while Jeff ditches her to join intellects of his own caliber, but discovers it's a front to harvest the sperm from the world's smartest people. Hayley bursts in just in time to free him from the harvesting machine, but they end up trapped in an office. Jeff gives himself a lobotomy with a coat hanger in an effort to make himself so dumb, he could come up with an idea that their captors could never think of. They strip and cover themselves with Vaseline, thinking it'll make them invisible, but it does succeed in making them uncatchable until the harvesting machine explodes. 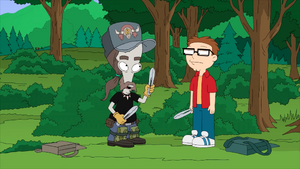 Meanwhile, after getting bit trying to collect snakes for the CIA, Roger ends up in the hospital with a large bill for the anti-venom. Seeing big money in harvesting venom from snakes, Roger tricks Steve into joining him in his attempt to harvest snakes, which results in the pair both being bitten. Steve refuses to fall for any more of Roger's tricks to try again, so the latter goes it alone until he ends up wiping out the world's supply of anti-venom from being repeatedly bit.

Previous Episode /// Who Smarted? \\\ Next Episode