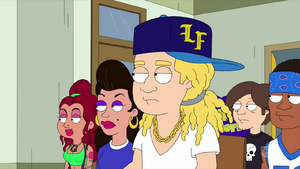 Whitey is one of the at-risk children in Mr. Deliver's class in "Stan-Dan Deliver".

At Ricky's funeral, his classmates all speak up for Mr. Deliver, noting that he drove Whitey to his mom's parole hearings. Steve begins to believe that maybe Roger wasn't a complete fraud after all and gets him rehired, only to have him get all the kids enlisted in the Chinese army.

She is seen at the Lanceton Recreation Center in "Garbage Stan".

Retrieved from "https://americandad.fandom.com/wiki/Whitey?oldid=74302"
Community content is available under CC-BY-SA unless otherwise noted.