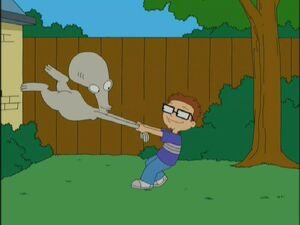 "When I Was His Alien" is sung by Roger in "A.T. The Abusive Terrestrial" when he feels that Steve doesn't like him anymore. The melody of the song takes inspiration from "A Little Fall of Rain" from the musical Les Misérables.

Roger: When I was his alien

And the world was young and gay

He thought I was as interesting

As teddy bears were cute

When I was his alien

Every day was Tanqueray

And the twilight Absolut

Through the winter and the spring

We'd make a game of everything

Chowing down on dunkaroos

He'd rather play with boobs than me

I can't believe our special bond must break

Now I'm not his alien

What we had must finally end

As a car on bricks

Now I'm not his alien

Sadness is my only friend

Well that didn't solve anything. Guess I'll just go out and get hammered.

Retrieved from "https://americandad.fandom.com/wiki/When_I_Was_His_Alien?oldid=43750"
Community content is available under CC-BY-SA unless otherwise noted.