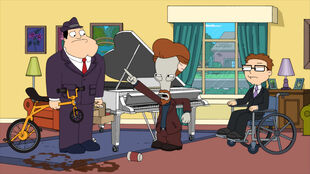 Plot: While Roger tries to convince Steve he should be more assertive when giving people bad news, Stan gets bored by Francine and Hayley's attempts to make Klaus cute for the internet and decides to join Roger and Steve's fictional detective agency. But when they take a case to locate a locker containing a young man's inheritance, Stan ruins the fun by being extremely incompetent and fouls up a lead in their case. Roger demands that Steve fire Stan, but Steve cannot bring himself to do it and ends up lying to Roger by faking the firing. 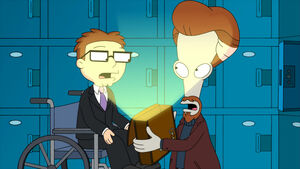 Things take a turn for the worse when they receive a finger in the mail threatening more harm to Stan unless they turn over the key. Puzzled by the interest shown in a fired minor employee, Steve confesses that he faked the firing. They return to their previous lead and without Stan, convince the clerk after Roger scans his butt in order to buy something to reveal the key fits a locker at the train station. At the station, they find the locker and discover a satchel inside that glows when they open it. 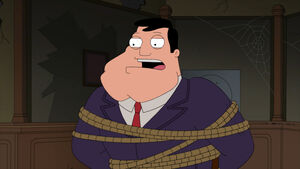 They meet at an abandoned bank where the ransom note said Stan would be and send in the key. They find Stan inside tied up and he reveals that the criminal is Teddy Bonkers, Roger's confidant and group secretary. Stan lays out a story about how Bonkers' jealousy caused him to set up and then kidnap Stan. As Roger accepts the story, Steve finally grows enough backbone to confront Roger on how stupid the entire plot involving Bonkers is and it turns out that Stan faked his kidnapping in order to make Steve finally become assertive and submitted a fish stick for his finger. Roger refuses to continue playing his role without his teddy bear, leaving Steve to tell their previous clients bad news including the young man who's legacy is simply a light up empty bag.

After submitting Klaus' pictures to Cute Pet Pics Publishing, Klaus gets a call asking for permission to publish the family submission on the site only to discover it is Roger's bare fanny that he scanned being passed off as a baby hippo.

Retrieved from "https://americandad.fandom.com/wiki/Wheels_%26_the_Legman_and_the_Case_of_Grandpa%27s_Key?oldid=86339"
Community content is available under CC-BY-SA unless otherwise noted.