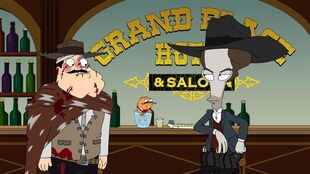 West to Mexico
In a western-themed story, Stan is hunted by bounty hunter Roger. 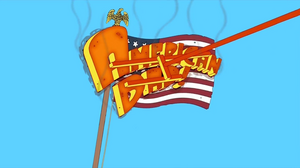 In 1870 Arizona, the Bullock gang ruthlessly guns down a family. At night, Roger as a bounty hunter seeks Stan from a group of Mexicans, but when the exchange sours over a joke, a gunfight results in their deaths. By day, a stagecoach carries Stan and Hayley towards Arizona, where small talk reveals that Stan had spent time in Mexico but couldn't understand the language. The parties gather at Consternation, AZ where Roger falls off of his horse in a stupor and it finds Stan who offers it water. Francine is thrown out of a saloon by rowdy customers, but when Stan inquires about the events, he is told to forget about her by Steve. Disregarding the advice, he steps inside, but runs afoul of Bullock and they fight, but when he has a gun within reach, his shaking hand forces him to push it away, allowing the rest of the gang to repeatedly kick him. 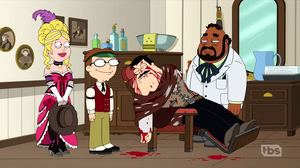 Hayley arrives at the farm where her family was murdered and lets out a scream as the townsfolk struggle to find someone who can stand up to the gang. Steve and Francine take him to Brian Lewis, the town barber who recognizes Stan, admitting that while he is a good guy, he isn't a hero. He tells his tale of being a former slave at the time of the civil war. He was temporarily freed and worked with Stan, but when his commanding general ordered the slaves returned, Stan shot him. They agreed to meet later in Arizona if Stan needed help. Roger arrives with his wanted poster and they quickly cover Stan up and Francine leads Roger away. They encounter Hayley who is still inconsolable over her family, but quickly step away as hillbilly Jeff offers to help her forget her problems if she has money. Brian awakens Stan and tells him of the bounty hunter, but when he starts to leave, assures him that he is unrecognizable in his present state. Jeff takes Hayley to an opium den where she opens up that the only thing of value on the farm was the well, and the only use for the well would be a train that isn't arriving for six months. However, Bullock is in the den and overhears her and offers to watch over her as the sole heir to the farm. Back at the saloon, Stan and Roger converse while Francine shows off a new dance, but when Roger's persistent cough causes him to spit blood over the wanted poster, he recognizes Stan. As he orders a round of drinks in celebration, Brian blasts him with a shotgun but misses due to Roger's speed which he further demonstrates as he holds them at gunpoint until he takes Stan away. As the townsfolk despair over finding a savior, Francine leads them to join as a group and they set off to rescue Stan, only to find Roger has already passed from sight with his prisoner. 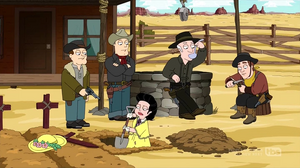 As they ride along, Stan tells his tale in which the general had actually gone insane and killed himself. Despite still planning to hang him, Roger admits he admires Stan's ability to make friends so quickly, pointing out that they are being followed by the townsfolk. The trail leads them to the farm where they find Hayley is being forced to dig her own grave. Stan insists on helping and gets Roger to cut his bonds. Although he initially refuses to go along, he quickly changes his mind. They confront the gang who laugh at him and insist that he faces them as a man. Roger offers him his gun, and as Stan's hand shakes, Bullock cocks his gun against Hayley's head. Roger suggests patting his gun like Stan did his horse and the shaking stops as the gang exchanges glances. Stan fires four times as Roger's speed kicks in, allowing him to position each of the gang members in the path of a bullet and moving Hayley out of the way. However, Bullock is only wounded and fires a shot at Stan which Roger intercepts with his own body as Hayley clubs Bullock with the shovel. Steve, Francine, Brian and Klaus arrive and unload a barrage of bullets into the dead gang members. As Stan cradles the dying Roger, he promises to complete his last bounty by turning himself in. Roger has other ideas and dresses himself in a Union army uniform and changes his facial features to pass for Stan. With his dying words, he orders Stan to collect the bounty and move back east. As the others join him as his family, they ride off into the sunset as they realize that east is in the opposite direction.

Retrieved from "https://americandad.fandom.com/wiki/West_to_Mexico?oldid=79023"
Community content is available under CC-BY-SA unless otherwise noted.