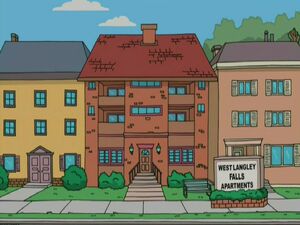 The West Langley Falls Apartments was where Francine lived in 1985. When Stan accidentally has Francine's memory erased and she believes she is still 18 in "Francine's Flashback", Stan decides that the best way to handle the situation is to have Francine believe that she is indeed still 18 years old. He has her moved back to her old apartment and Hayley is to be her roommate. After getting rid of the old lady that was living in Francine's old place, Stan and Hayley fix up the place so that it looks like it's still 1985. At the apartment, Francine throws a party. During this, Jeff, Hayley's boyfriend, tries to drag her to Burning Man, but she is unwilling. Back home, Stan comes up with another plan to get Francine to remember their life together. He finds a dried flower that he gave her on the day of their wedding, and goes to the apartment to show it to Francine. When he gets there, he and Hayley discover that Francine and Jeff ran off together to the Burning Man.