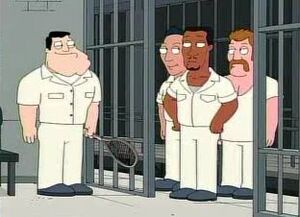 Wesley Trent Snipes (born July 31, 1962) is an American actor, film producer, and martial artist. He has starred in numerous action-adventures, thrillers, and dramatic feature films but is best known for his role as Blade in the Blade trilogy.

Wesley Snipes is one of the happy prisoners at minimum security Chimdale Prison in "Man in the Moonbounce". He has it so easy, he doesn't want to be released.

Westly is voiced by J. Lee.