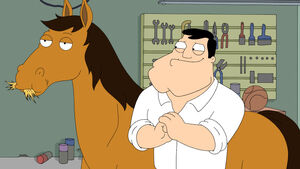 Well I'll Be a Son of a Bitch is the horse Stan bets on to win a horse race in "Don't Look a Smith Horse in the Mouth" in order to win money and keep his SUV. He believes its a sure thing when he sees the name circled on a racing form that he stumbles onto but it turns out Roger only circled the name so he could remember which horse he was riding while he was high. When the horse loses, its owner decides to kill it for the insurance money but Roger confides in Stan that he had been intentionally tranquilizing the horse to force a bigger win and convinces Stan to buy him. As a prank, Roger convinces Stan to 'service' the horse but the horse is so traumatized it is unable to race. Stan switches brains with the horse and manages to win.

Retrieved from "https://americandad.fandom.com/wiki/Well_I%27ll_Be_a_Son_of_a_Bitch?oldid=51931"
Community content is available under CC-BY-SA unless otherwise noted.