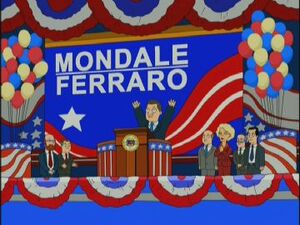 Stan tries to use Hayley's trigger word of "rhubarb" to make her obey him in "Stan Knows Best" which he implanted when he brainwashed her in a plotted assassination attempt of Walter Mondale. The trigger word fails to have an affect on Hayley, but Steve is seen walking in the background with a sniper rifle.

Stan finds out that he altered the past in "The Best Christmas Story Never", resulting in no assassination attempt by John Hinckley Jr. and costing Ronald Reagan the 1984 Presidential election to Walter Mondale who promptly surrenders the US to the Soviet Union. Stan finds out that he has to make the assassination attempt when he fails to impress Hinckley with Jodie Foster in HIS version of Taxi Driver.

Retrieved from "https://americandad.fandom.com/wiki/Walter_Mondale?oldid=68906"
Community content is available under CC-BY-SA unless otherwise noted.