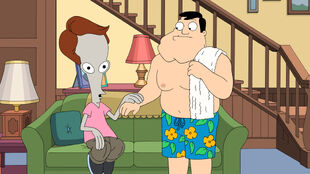 Vision: Impossible
After an auto accident, Roger starts to have visions of the future.

Roger's Disguise: Scientist/inventor from "Can I Be Frank (With You)" 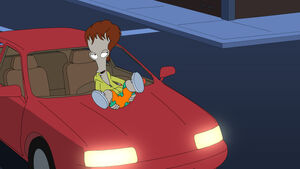 Roger tries to scam the Smiths with a fake birthday to do something adventurous but they refuse to fall for it, preferring to take in the American Safety Museum as Hayley shows up with a baby raccoon to raise. Roger tries to get a picture of his crotch at a red light camera but is struck by a truck and lands in the hospital. Following a coma, Roger has a vision of his doctor being fired when he touches him while shaking his hand. As the doctor espouses on how good a job he does, the patient in the next bed dies and he realizes the vision came true. As the late man's wife grips Roger, he sees her with her future boyfriend as the nurse that comes for the body matches the vision. 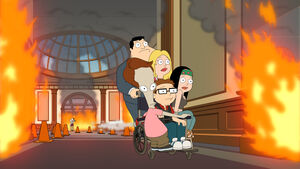 Steve tries to get Roger's help in impressing a girl and is told to become a jock. Touching him at home, Roger has a vision of him failing to follow through. Roger has visions for the other members of the family including a new car for Francine and a violent image of Stan at the Safety Museum. At the museum, a disgruntled former employee starts shooting up the place and a fire breaks out. With most of the equipment props, Roger directs them in the right course of action and they escape the carnage as Francine's car is destroyed by debris. Roger's visions bring the family luck although he sometimes uses the visions to prank the family. The questions about their future quickly become annoying and Roger figures out they are only interested in his power. Roger goes for a drive to clear his head, tricking the family into staying behind. At a red light, Roger has another accident and wakes up at the hospital again. When his nurse annoys him, he tries to see her future and fails, discovering his powers have left him. John Q. Mind answers from the next bed and uses his power to give Roger a drink before levitating onto a summoned motorcycle and leaving Roger who refuses to drink from the glass.

Returning home, Roger finds the family has remained in the house for the three weeks while he recuperated and they only leave when he fakes a vision of their safety. Outside, an electrical worker drops a power line in the yard as the sprinklers come on and birds are electrocuted as the Smiths return to the house. Hearing a noise from the basement, they discover the raccoon has gotten into the protein powder and worked out to become a monster. The family decides to spend their remaining days in the bathroom as Roger tries to talk them into taking some risks. Trying to flee, Steve is attacked and strikes the raccoon with a hammer. The raccoon has a vision of dying and runs into the yard to escape, being electrocuted just like the birds earlier.