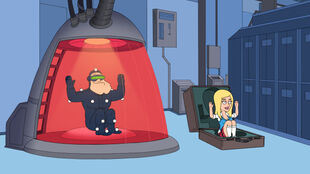 Virtual In-Stanity
Stan makes a desperate attempt to bond with his son by creating a busty blonde bombshell. 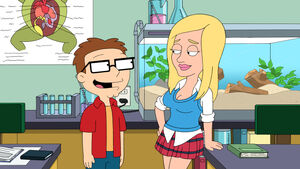 While playing poker with the guys, Stan observes Dick trying out his avatar "Black Dick" to work out some frustration from losing. Francine calls and warns him that he is about to miss Steve's birthday yet again. Stan rushes home with a stuffed rabbit full of heroin as a gift. Over home movies, Stan realizes he isn't in any of them because he was always busy with other things. After Steve gives him the brush off from an invitation to a baseball game, Stan starts worrying that he may miss out on a chance to bond with Steve. Stan makes a desperate attempt to bond with his son by creating a busty blonde bombshell avatar, Phyllis, whom he sends Steve’s way. After a date at a baseball game, Steve tries for tongue in a goodnight kiss but Stan just rubs his head. Thinking that Phyllis only wants to be friends, Steve is hesitant to pursue the relationship and is attracted to Chelsea who shows an interest in him. When Stan finds out that his plan isn't working and Steve is going to ask Chelsea to the Homecoming Dance, he makes a desperate offer through Phyllis to have sex with Steve who gladly accepts. Despite some reservations about having sex with Steve, Stan is determined to go though with the act. But when Francine discovers what he is up to, Francine attempts to intervene with Stan to stop him. Unable to get though the avatar chamber, Francine takes a power lift mecha to keep Steve’s virginity out of “blonde’s” way. Tackling Phyllis while Steve is in the bathroom trying to ready himself, Francine convinces Stan that he should just accept his life with Steve the way it is. Stan has Phyllis break up with Steve. When Steve attempts to hook up with Chelsea again, he finds she is no longer interested in him. 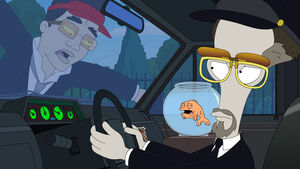 Meanwhile, Roger steals a limo and starts his own limo service. When a group of guys “drive and dash”, he goes on a manhunt to get his revenge. Roger runs over one of the guys almost immediately. At his funeral, Roger runs down two others. As the last two worry about their fate, one goes off to the restroom where he observes the limo's tires roll by. When he opens the stall, Roger is there to run him down as well. As the last survivor tries to flee on an airplane, he looks out the window to see Roger in the limo on the wing as Roger runs him down as well, causing the plane to explode and killing most on board. As Roger and Klaus pass a surviving stewardess in a parachute, Roger undoes her chute causing her to fall to her death as Roger and Klaus crash land in their own parachutes.

Retrieved from "https://americandad.fandom.com/wiki/Virtual_In-Stanity?oldid=79548"
Community content is available under CC-BY-SA unless otherwise noted.