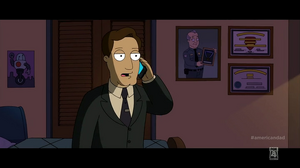 Vincent Edmonds is the son of the late Lt. Eddie Thacker and Mrs. Marylin Thacker. When Marylin is executed for the murder of her husband at the Virgina State Prison in "Blagsnarst: A Love Story", Vincent is there as a witness. He returns to the family home in sadness as he prepares for an election as attorney general. As his son is hit by a car outside, he discovers a secret hiding place under the floorboards containing The Golden Turd. Ignoring everything else in his life, he calls Wyatt Borden, a wealthy chemical dumper that pledges to help him and even make him president one day.

As the political primary takes place in "Father's Daze", Vincent, now going by his family name of Thacker, continues his obsession with the Golden Turd until his campaign manager confronts him over his behavior. Spying the gem, they tussle and Vincent is killed.

Vincent is voiced by Corey Stoll.

Retrieved from "https://americandad.fandom.com/wiki/Vincent_Edmonds?oldid=70322"
Community content is available under CC-BY-SA unless otherwise noted.