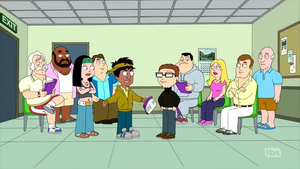 Vikram is a gyro delivery boy who is in on the plot to prank Roger for his childish stunts in "Death by Dinner Party".

When Klaus who is providing the catering or Francine's dinner party falls behind, he orders gyros as a stopgap measure. But when a suspected serial killer appears to be stalking the party,the group splits up with Steve paired with Colonel Withersby, and old family friend who is also known as "uncle" by Steve. When Greg Corbin appears to have been killed, the rest hear a scream from the back yard and find the Colonel holding Steve's body, although it is revealed that he was only giving comfort after they find Vikra dead.

Later, as the rest of the family and guests appear to have been killed and the colonel menaces Roger who stabs him multiple times in self-defense, the group reveals that it was all a prank, with Vikram being a tough sell in rehersal, but had come though in the end.

Retrieved from "https://americandad.fandom.com/wiki/Vikram?oldid=77694"
Community content is available under CC-BY-SA unless otherwise noted.