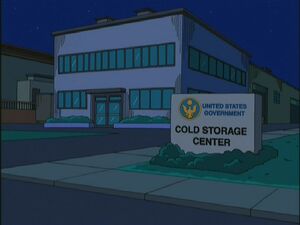 The United States Government Cold Storage Center is where Stan had sperm stored before a dangerous mission in the 80s. In "Iced, Iced Babies", Francine becomes so desperate to have another child that she breaks into the facility to use Stan's sperm after she finds out he had a vasectomy. When Stan beats her to his sperm, she threatens to use George Stephanopoulos' instead. Stan shows Francine the U.S. Center for Milking Technology next door and uses the example of a cow letting her calf go off on its own to show her that she has done a good job of being a mom when her children leave her.

Retrieved from "https://americandad.fandom.com/wiki/United_States_Government_Cold_Storage_Center?oldid=44439"
Community content is available under CC-BY-SA unless otherwise noted.