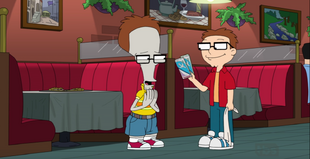 Twinanigans
Steve and Roger restart their career as a twin brother acting duo. 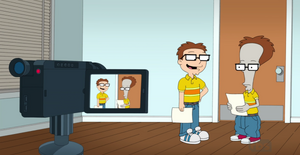 During a video night with Klaus, he discovers that Steve and Roger were in a commercial together as twins but quit acting when Steve was ready to start school. This bums out Roger, but to cheer him up, Steve proposes going to Hollywood and getting new acting gigs. For a remake of The Parent Trap, they decide they only want Steve and will digitally enhance him to make it look like he's a twin since Roger cannot act except for an ability to eat things. This irritates Roger, who tries to sabotage him, and when that fails, he becomes determined to make it without Steve. Roger resorts to being a caterer at a party with Hollywood elites in order to pass around his head shots, but when they show the trailer for Steve's new film, he helps himself to a pile of cocaine to relax just as the party is raided by the DEA. They offer him a chance to get out of his charges if he helps them take down a big dealer named Andy Benedict.

Steve is naturally concerned, but Roger believes it to be just another acting job. Trying out various methods of acting, Steve arrives just as Roger's idea of sex appeal exposes the wire he's wearing. Together, they take out the members of Andy's gang with their twinanigans. But after an impassioned speech from Steve, he prepares to shoot him, only to be foiled when Roger eats his gun. When Roger turns his back on Andy so he and Steve can exchange some heartfelt words, he pulls out a second gun and takes aim at Steve. Roger forces the gun that he ate near the his skin enough to pull the trigger and shoots Andy. As they bond further as they leave, Roger thinks he sees a rat and fires twice more, severely injuring himself in the process. It turns out to only be an old t-shirt that Roger wants to take with him. 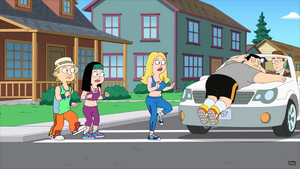 Meanwhile, as the rest of the family prepares to go out power-walking, Stan is struck by a car. The owner is in too big of a hurry to stay, so he leaves a credit card with Stan, telling him to get anything he wants. They find out the card is only good for Spencer's Gifts, which they dismiss as junk at first. But after a visit, they completely revamp their house and lifestyle with the novelty gags. The owner arrives concerned that they've spent over $9,000 and demands that they return everything. But when they reveal that they have well-used their items and he threatens to kill himself, they try to cheer him up with a whoopie cushion. Amused, he reveals himself as the owner of Spencer's Gifts. Believing they are in a chocolate factory scenario, they question if they are about to inherit the gift stores, but this is not the case.

Retrieved from "https://americandad.fandom.com/wiki/Twinanigans?oldid=84704"
Community content is available under CC-BY-SA unless otherwise noted.