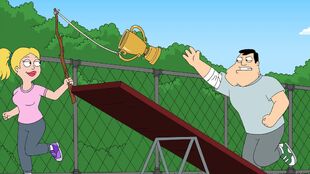 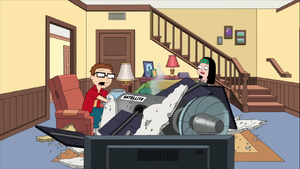 When Francine begins to worry that Stan doesn't really need her, she spots a falling star and makes a wish that he would. However, the 'falling star' is really a crashing satellite that smashes Stan flat. Needing several months of physical therapy, Francine insists on being the one to do it and discovers the secret to motivating him is to award him a trophy for each goal met. But when a fully-healed Stan's dependence on Francine interferes with his CIA job, he quits and buys the trophy shop to go into business with Francine. 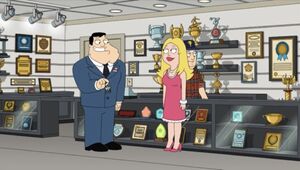 But with their customer service experience sadly lacking, they begin to worry about making money. Stan suffers from dependency issues when Francine leaves him alone, along with an overactive libido that results in her firing him from the store. Stan tries to put her out of business by buying a pickle store across the street, but advertising it as a trophy store without luck. He decides the best way to put her out of business is to crush her store by chopping down his, but is deterred after the first swing. However, a passing truck driver spots him in his pickle costume and mistakes him for a monster, knocking over the store where it comes up just short of Francine's. Just as Stan resigns himself to having to let Francine stay in business, the truck driver tries to gun him down and hits the pressurized brine tanks of the pickle factory, launching it like a rocket into Francine's store along with Stan, who finds himself back in the hospital where Francine decides to let the doctor oversee Stan's physical therapy.

The truck driver prepares to go to bed, having been celebrated for 'killing' the pickle monster, only to find the real one stalking him in his home as he screams and the lights go out. 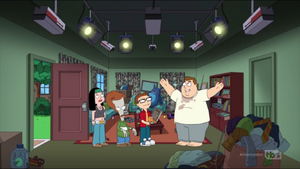 Meanwhile, it turns out that the satellite that crushed Stan secretly records Tuttle's daily life as part of a hit Korean show, so Steve, Hayley, Roger and Klaus head over to be on the air. Roger tries to take over the show, but Klaus insists on keeping it a secret as they try to make themselves stars. But when they check the reviews, they find they drag the show down. They chase away Tuttle, who thought they were his new friends and had brought them a cake. Saddened, he throws it away inside his home and sprays it with cleaner to discourage himself from eating it, annoying his Korean audience who start to leave. But as he hesitates and then returns to eat it anyways, they cheer as their old "sad fatso" is back.

Retrieved from "https://americandad.fandom.com/wiki/Trophy_Wife,_Trophy_Life?oldid=89709"
Community content is available under CC-BY-SA unless otherwise noted.