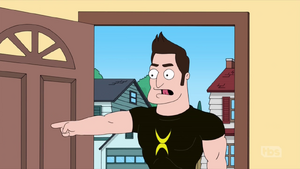 Trey is the cross-fit trainer for Stan, Steve, Hayley and Jeff in "The Dentist's Wife".

After their first workout, the return home bragging about their prowess, but when Klaus tries to join in, they cut him off. Exhausted, they take a nape where they drop, but awaken to find they have become so stiff they can no longer move. Klaus sets out to enjoy himself with them unable to stop him, blaring his favorite songs at high bass and ordering pizza. He invites a group of perverts from Craigslist and they make themselves at home with the Smiths. The Smith's surrender just as Trey bursts in, clearing the house, having come searching for them after they failed to show up for their second workout. After saving them, he departs for his second job as a marine biologist.

Trey is one of many having an affair with Mrs. Lonstein in "Criss-Cross Applesauce: The Ballad Of Billy Jesusworth".

He is present at the unveiling of the town mural after it is "restored" by Stan in "The Mural of the Story" and was to be a panelist for the Mayoral election in "Railroaded" before the segment is cut short.

Trey is a judge in the body building contest in "One-Woman Swole" and is seen when Jeff's dog Fleabiscuit wins at Lanceton Downs in "Fleabiscuit" and sells pancake mix on the Langley Home Shopping Network in "I Am the Jeans: The Gina Lavetti Story".

He works as the DJ at the Wrecking Balls strip club in "Cheek to Cheek: A Stripper’s Story" , is that the farmers market in "One Fish, Two Fish" and appears during "Everyone is Happy in Utopia" in "300".

Trey is voiced by Thomas Lennon.

Retrieved from "https://americandad.fandom.com/wiki/Trey?oldid=91244"
Community content is available under CC-BY-SA unless otherwise noted.