Daisuke Suzuki, Russian voice in "Of Ice and Men" by Emmanuel Todorov

Toshi Yoshida hangs around with Steve, Snot and Barry and usually speaks only Japanese. Toshi actually hates Steve, but apparently not to the point that he has yet inflicted physical harm upon Steve with the exception of Snot's help for stealing from them, or refuses to be in Steve's friend group. Steve himself is unaware of this hatred, due to him not being able to understand Toshi.

His family lives an upper middle-class lifestyle, although in "Best Little Horror House in Langley Falls" and "Spelling Bee My Baby", it is apparent that they are financially well off and are hinted to have connections within Japanese crime syndicates. His mother and father can speak English, and he also has a sister named Akiko, who can also speak English. His father is also a shrewd and ruthless businessman and investor, notably in "Independent Movie".

Toshi is a quiet and normally reserved Japanese adolescent, although he has expressed the desire to kill Steve as his greatest wish in "Finances With Wolves". In "Stan Knows Best", it was made known that he has an obedient woman waiting for him back home in Japan, even though later in "Of Ice and Men", Toshi gets another woman, Svetlana, the Russian mail order bride. In "Bar Mitzvah Hustle" Toshi is shown to know that he knows about Roger being an alien by stating when introduced to Steve's "Uncle Roger", "Ah yes, the alien in the wig", making Toshi one of the few outside the Smith family and the CIA to know the truth about Roger. He is aware no one besides his own family can understand him as evidenced in "Bar Mitzvah Hustle" and after his speech in "The Magnificent Steven" when he calls Stan Smith crazy and a psycho. In "Bar Mitzvah Hustle", it seems that he has to spend the rest of his days haunted by a 12th Century Shogun Warrior, Minamoto. 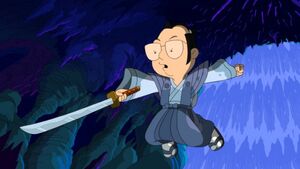 Toshi is shown to be a bloodthirsty and a sadistic killer just like Barry, as he says, "I have killed for both honor and pleasure". In "Best Little Horror House in Langley Falls", Toshi nearly kills Steve for failing to bring home his sister Akiko on time but satisfies his blood lust by killing several escaped serial killers threatening Stan, Francine and Roger.

Toshi appears to be able to both understand and speak English, though he almost exclusively speaks in Japanese. In "May the Best Stan Win", he repeated "Shot for shot remake of the movie Mannequin" along with Steve, Barry and Snot. Also in "Man in the Moonbounce", while at court for egging Henry Calloway's house, he says, "Yes, your honor" along with Stan, Snot, Steve, and Barry but cannot be heard. He is also credited with writing a joke in English; in "Phantom of the Telethon", Stan comes into contact escaped terrorist, Snake, and follows by delivering a joke written on paper which reads, "Time to meet your Mecca," after which Steve and Snot pat Toshi on the back.

His first solo English dialogue is delivered in "Can I Be Frank (With You)" as part of the Boyz 12 boy band's song "Girl You Need A Shot (Of B12 (Boyz 12))". He sings much of the song in English with his bandmates, but delivers two solo English lines with "I'm B3, wanna be with me?" and "Japanese!".

Toshi is gifted with origami, and also plays both the maracas and bass guitar. This is seen in "American Dream Factory". He speaks fluent Russian from learning it to impress Svetlana in "Of Ice and Men". He is also a gifted artist, where he paints Hayley and Steve in "Shallow Vows". He was also shown to be a highly skilled swordsman, capable of killing several dangerous serial killers in "Best Little Horror House in Langley Falls".