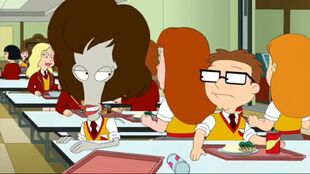 Top of the Steve
Steve runs away to an all-girls boarding school. 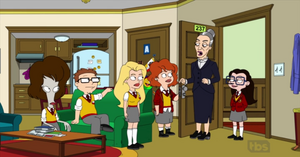 Fed up with Stan's attitude, Steve runs away to Pendlingtonton Academy and Roger tags along for obvious comedic reasons, only to discover it's an all-girls school. However, the headmistress of the school is very displeased that he was placed in her school by the trustees and vows to kick him out. After being called to her office later, she informs him that he needs to win the athletic decathlon or be kicked out, but luckily, their roommate Spitz discovers an addendum to the rules that he only needs to win any event at the school, and they enter a battle of the bands. With the situation spinning out of control, Roger suddenly realizes and tells Steve that they're in a spinoff. 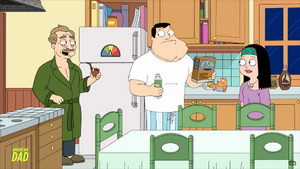 After Steve runs away, Stan is surprised when a replacement character named Spunky Rooster shows up to take Steve's place. With an overwhelming cuteness and the ability to beat Stan at basketball, she soon disappears but is quickly replaced by an Englishman who also gets on his nerves.

Roger informs Steve that should they win the Battle of the Bands, they will be forced to leave American Dad! forever. They try their best to lose, but find the writers are against them by putting no other bands in the contest. Attempting to make a run for it, they avoid various tropes that could keep them in the story, but when they get trapped in an office, Roger gets an idea when he realizes the set is cheap, the writing is lazy and sees a Canadian flag outside, and realizes they're in Vancouver. He directs Steve to singing a few notes from a Beatles song in order to bust the show's budget, and they quickly find themselves back home. A sobbing Stan gives them a warm welcome and offers to go dig for dinosaur bones in the backyard while Spitz is given the starring role in the show.

Previous Episode /// Top of the Steve \\\ Next Episode

Retrieved from "https://americandad.fandom.com/wiki/Top_of_the_Steve?oldid=85766"
Community content is available under CC-BY-SA unless otherwise noted.