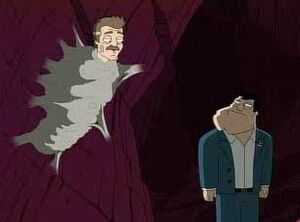 Thomas Roy "Tom" Skerritt is an American actor who has appeared in over 40 films and more than 200 television episodes since 1962.

He appears in Roger's subconscious, begging for work in "Brains, Brains and Automobiles".