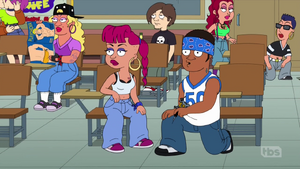 At Ricky's funeral, his classmates all speak up for Mr. Deliver who watches nearby as Tiglet turns the eulogy from Ricky to a memorial for their teacher as well. Steve begins to believe that maybe Roger wasn't a complete fraud after all and gets him rehired, only to have him get all the kids enlisted in the Chinese army.

He is seen at the Lanceton Recreation Center in "Garbage Stan".

Retrieved from "https://americandad.fandom.com/wiki/Tiglet?oldid=74301"
Community content is available under CC-BY-SA unless otherwise noted.