For a complete script, see: "Threat Levels" on the Transcripts Wiki

Stan: You paid? You said you were going to the bathroom.
Francine: I did both.
Stan: Well, you can just do it all, can't you?

Man: You are all going to live...
[The family cheers]
Man: ... for 24 more hours. Which is just enough time for you to learn not to interrupt someone when they're talking.

Stan: I'm saying: You're fired!
[Donald Trump appears and demands Stan to pay for the use of the phrase]
Stan: Oh, for God's sake, somebody pay Mr. Trump.

Stan: That's passive past tense, Trump. You don't own that.

Stan: This is not soup. 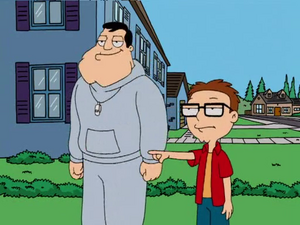 Steve: I found a bum who's willing to scab. All you gotta do is dress up like a bum and fight him.
Stan: Son, you're a lifesaver! All right, where's the bum who's stupid enough to step into a ring with me? [Steve points] Who the hell is that?!
Steve: He doesn't have a name.
Stan: What do you mean?
Steve: He killed his own name.

Retrieved from "https://americandad.fandom.com/wiki/Threat_Levels/Quotes?oldid=87832"
Community content is available under CC-BY-SA unless otherwise noted.