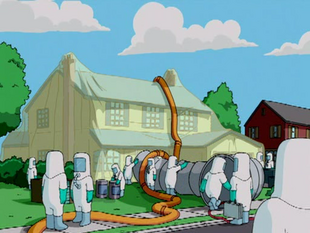 Plot: Stan accidentally brings home a liquid contaminated with a deadly virus. The CIA puts the entire family on quarantine and, since they are supposed to die within a day, they decide to spend it watching the entire first season of 24 on DVD. While they wait for a horrible death, Roger makes plans to redecorate the house once they are gone. As it turns out, however, that sample of the virus was inactive. 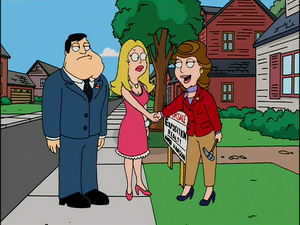 The virus scare causes many neighbors of the Smiths to put their houses for sale, and so Francine meets a real estate agent and wishes she too could go into the business. Stan then uses his connections to have the real state agent they had met, "Barb", shipped to the Guantanamo Bay detention camp and put Francine in her place. But Stan is ashamed when Francine makes more money than he does, as he fears he may be emasculated by the whole situation. He tries to resolve the problem by having Francine's boss arrested and her agency shut down, but Francine goes into business on her own, working out of the house and even hiring Roger as her personal assistant.

Hayley uses one of the houses in her mother's portfolio to set up a shelter for the homeless. Steve and his friends, looking for a way to make money to buy a Gamestation, had wanted to use the place to run a Girls Gone Wild knockoff. When Hayley's shelter prevents this, they decide to use the situation and run bumfights with the homeless men at the shelter. When informed of this by Hayley, Stan sees an opportunity to start making more money than his wife; he muscles Steve and his friends out and takes over the bumfight business. 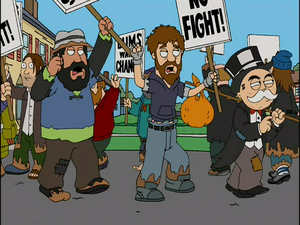 This infuriates Steve and Hayley, and to break Stan, Hayley unionizes the bums, who go on strike, leaving Stan without a fight to offer to his paying customers. He is then tricked into fighting an enormous man, described as a bum so bad that he "killed his own name". As it turns out, however, Hayley and Steve had rigged the fight, as the bum was actually an actor payed to throw the match after having pummeled Stan a bit.

At this point, Francine apparently convinces Stan to come to terms with her making more money than he does. The next day, Stan wishes Francine a good day at work but learns on the news that Alan Greenspan raised interest rates, putting Francine's real estate market out of business. It turns out, Stan uses his CIA contacts to kidnap Alan Greenspan's dog and force him to raise interest rates. Stan, relieved to know that everything is back to normal, walks out the door happy.