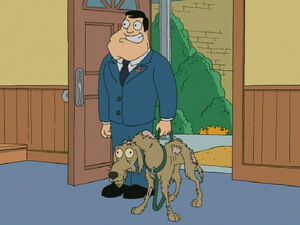 Thor was an old dog who was alive during the Reagan administration.

He appears in the "Pilot" when he is bought by Stan for Steve after the latter said that he was considering a career in the military although Steve's true reason for wanting a dog was to "pick up chicks". Thor is shot dead by Stan after he fears Osama bin Laden has broken into his house when in reality it was Roger in the fridge. Thor makes another appearance when his corpse is used as an excuse by Hayley for not doing her essay.

Thor is mentioned in "Stan's Best Friend" when Stan claims it was a dream by Francine.

Retrieved from "https://americandad.fandom.com/wiki/Thor?oldid=66501"
Community content is available under CC-BY-SA unless otherwise noted.