There Will Be Bad Blood 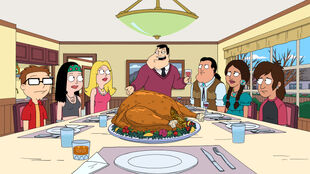 There Will Be Bad Blood
The Smiths prepare for the arrival of Stan's half-brother's family for Thanksgiving. 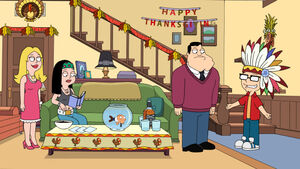 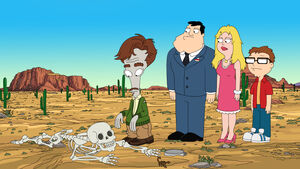 It’s Thanksgiving in Langley Falls, and as usual, Stan invites his half-brother, Rusty, over to show off his cornucopia of wealth and good fortune, believing him to be poor. But when Steve becomes too demanding as the only remaining child in the household after his sister's marriage, Stan decides to take him to Rusty's house to make him appreciate what he has. But when they arrive, they find out that that Rusty is far wealthier than he led on, having taken what their great-grandfather believed was worthless land and now earning 18 million a year in copper deposits. Stan and the family return home depressed and when Stan stews over his choice to take a mere $20,000 from his great-grandfather's estate which he promptly lost on the bus, believes he is the rightful owner of the land. Stan and the family return to the house and kidnap Rusty and his family, forcibly transplanting them to their old house while the Smith's move into theirs. Rusty and his security staff return and forcibly eject the Smith's, pledging to kill Stan if he returns. During a temper tantrum on the helicopter flight out, Stan knocks out the pilot causing the helicopter crash. As the mangled helicopter pilot goes off in search of help, Stan decides he can return to try to take the house from Rusty again. Following Roger's advice, they soon become completely lost. Freezing in the cold night, they are found by Jeff and Hayley. Dining on a Thanksgiving dinner of turkey jerky, Stan realizes how much he really has and reconciles with Hayley, inviting her and Jeff to live with them. Rusty finds them and threatens to shoot Stan but is startled by the returning helicopter pilot and shoots him instead, allowing Stan to topple him onto the pilot's corpse and the family escapes.

Previous Episode /// There Will Be Bad Blood \\\ Next Episode