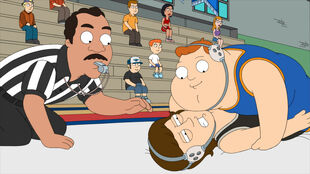 Barry takes down an opposing wrestler.

Plot: When Steve brings home his report card, Stan fails to be impressed by Steve's good grades, insisting that athletics are the only thing that matters. After showing Steve his awards from his wrestling days he tries to talk him into becoming a wrestler himself but Steve points out the wrestling program was discontinued at school.

Outraged, Stan decides to restart the wrestling team, but when he is unable to find any interested students, drafts Steve and his friends. Snot, Steve and Toshi prove to be inept but Barry turns out to be a surprisingly good wrestler, winning enough matches to challenge Stan's state record. Shocked, Stan wants to pull Barry off the team but Principal Lewis refuses, having bet on Barry to beat Stan's record. 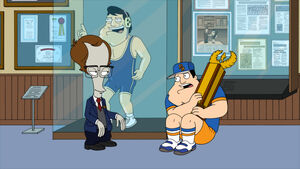 As Stan worries about a future without his record, Roger volunteers to arrange for Barry to lose and Stan agrees. After their first attempts fail to work, Stan tries to shoot Barry from Roger's Place, only to have a tree get in the way. When Roger slides down a zip line and moves the tree with his legs, Stan gets the idea to have Roger wrestle and beat Barry. After Roger stops Barry and Stan thinks all is well, Roger proceeds to go after Stan's record himself. 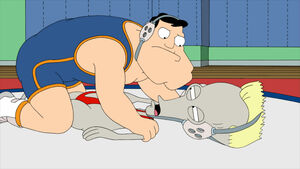 Desperate, Stan re-enrolls in school to wrestle against Roger and protect his record. As Stan and Roger wrestle, their match drags on for ten days until Roger gets Francine to reveal that she put him up to beating Stan's record simply because she was tired of hearing about it. As Stan pauses to think, Roger manages to pin him and win the match. Stan watches in sorrow as they remove his banner signifying his wrestling record, but is happy when they hang a new banner celebrating Stan's new record as part of the longest man-on-man embrace.

Previous Episode /// The Wrestler \\\ Next Episode

Retrieved from "https://americandad.fandom.com/wiki/The_Wrestler?oldid=89235"
Community content is available under CC-BY-SA unless otherwise noted.