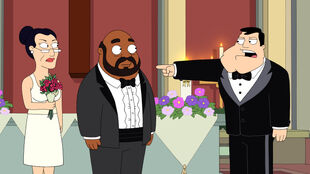 The Worst Stan
Stan convinces Principal Lewis to marry the school superintendent in order to be the Best Man at their wedding.

Roger's Disguise: Sarah Tobias (The Accused) from "You Debt Your Life" 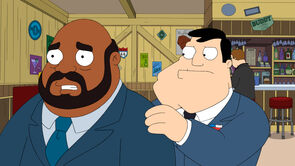 When realizing that he might never fulfill his dream of becoming a Best Man, Stan Smith takes Principal Lewis to Buffalo Crazy Wings and tricks him into choking on a chicken bone when he tells him the wings are boneless. Stan convinces Lewis that he doesn't want to die alone and Lewis admits he has an attraction for superintendent Ellen Riggs. After getting Ellen to agree to the wedding, Stan begins preparations. While going through a box of photos for the bachelor party, Stan discovers that Lewis had a friend named Tracey Bryant in prison. Stan tracks down Tracey and invites him to the wedding, only to discover that Tracey was Lewis's "prison wife" and insists that by prison rules they are still married. Agreeing to clear up the problem, Stan attempts to kill Tracey but returns to find him back with Lewis. When Stan tries to remind Lewis of his planned wedding to Ellen, Lewis admits he still has feelings for Tracey. Deciding to play by prison rules, Stan beats up Lewis and makes Tracey his prison bitch. With the wedding back on track, Stan meets with Ellen, Lewis and the flower girl Ashley over dinner at Wong's Golden Wok to ask questions to prepare his toast at the wedding. While Lewis and Ashley are away, Stan discovers that Ellen's sole purpose for marrying Lewis is to have a baby so she can get elected to city comptroller. When Stan questions why she would tell him her plans, she admits that she is aware that Stan is also using Lewis to get what he wants and knows he won't spill the beans. At the wedding, Stan deals with conflicting emotions until Lewis' stepfather Mr. Druffel tells him to go with how his heart feels. Stan stops the wedding and convinces Lewis he'll be happier single. Frustrated that her plans has been spoiled, Ellen knocks out Stan, demanding to know how she'll achieve her baby and promotion now. Due to Ellen knocking Stan out, Tracey now considers himself to be her bitch. The two become romantically involved and eventually get marry. Soon, Ellen becomes pregnant with their son. Sometime after the birth of their son, she wins the election to become comptroller. 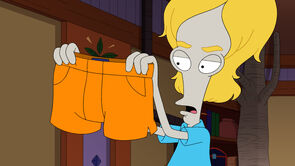 Meanwhile, when Roger is given a magical pair of shorts by an old gypsy woman that make his legs tall and muscular, he heads to Miami, Florida with Steve Smith to go clubbing. There he runs into Ricky Martin who is attracted to him. When Ricky gets Roger alone he asks him to take off his shorts and Roger refuses, knowing what his legs really look like without the shorts. After getting advice from Steve, Roger comes clean to Ricky and takes his shorts off, showing him how his legs really look. Ricky is delighted because he too was given a magical shirt by an old gypsy woman that hides a massive beer gut, making it appear muscular as well. Amazed at the power of the shirt, Roger steals it and proudly wears it with the shorts.