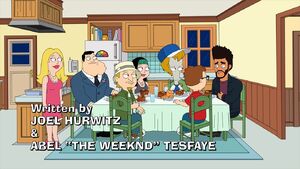 Abel Makkonen Tesfaye, known professionally as The Weeknd (born February 16th, 1990) is a Canadian singer, songwriter and record producer. He has sold over 100 million records worldwide, making him one of the world's best-selling artists.

The Weeknd guest voices as himself in and co-wrote "A Starboy is Born", making him the first American Dad! guest star to also write the episode he appeared in.

The Weeknd also appears during "Everyone is Happy in Utopia" in "300".