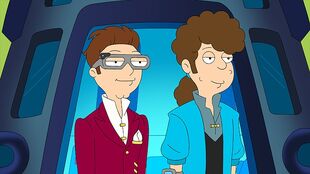 The Unincludeds
Steve & Snot's future selves stop them from throwing a party. 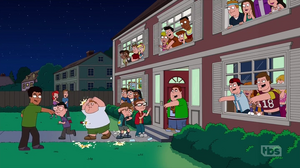 The guys get invited to a party hosted by Mertz for the cool kids, only to find they were set up to be egged. Later at a restaurant, they peruse the pictures the other kids took and receive a suggestion from a mysterious janitor to throw their own party, which Steve decides to do while his parents are on vacation in Bosnia for all of the kids that never get invited to parties. Their party is a success and when Mertz shows up, they return the favor. As the guys celebrate their new reign of cool, Steve and Snot's future selves show up from the year 2040 and tell them that they cannot return to the party. The guys are surprised that they are still friends and it is revealed that it is only possible because Mertz set them up by stealing one of their time machines and posed as the janitor to give them the idea for the party, and by doing so, would assure that their prosperous future wouldn't come to pass. When most of the guys agree to go along, Snot disappears. 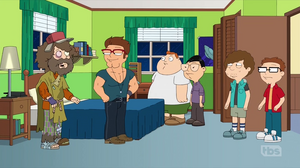 As Steve searches for Snot, future Steve and Snot reveal that Toshi had quit speaking to the guys after high school and Barry died in a Formula 1 accident. A hot girl arrives and flirts with Steve. He takes advantage of the moment and they make out through the party as Future Steve changes to a dumb jock and Snot becomes a bum. Steve Prime wants to use the time machine to set things right but they find it has also disappeared. Snot blames Steve for his future as he has an idea to make Snot popular as well. He tries to talk to a girl but it backfires and Snot insists on giving up. Future Steve becomes even more ripped but Snot is now a convict. They try again with smokers and things still are not right. Steve tries to reverse things by having Snot act more nerdy instead of cool and it still fails. Snot points out that they have long since stopped being friends so they dance in the party in their underwear together to become outcasts with even the outcasts again, but it is taken as being cool so they strip naked, which reverses future Steve and Snot through their incarnations and ruins the party. However, various future selves greet them later. 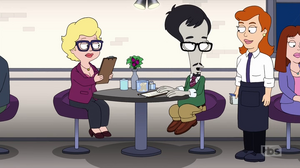 Meanwhile, Roger and Hayley dine out and he takes offense when Hayley's choice is complimented and not his. He has them disguise themselves and reverse their orders to see what happens and despite her making a mistake, she is still complimented and Roger isn't as he declares it is now personal. Roger stalks the waitress on her off time to take her order as a waiter only for her and her date to have the same dish. He later comes running out and jumps into the car with Hayley, having scalped the waitress.

While on their vacation to visit former Olympic sites and to imagine the athletes that have long passed their prime, they visit Bosnia where Stan asks if Francine had ever done it in a former Eastern bloc stadium. She is unsure and wants to know if a stadium full of Romanians is in the Eastern bloc and counts.

Previous Episode /// The Unincludeds \\\ Next Episode

Retrieved from "https://americandad.fandom.com/wiki/The_Unincludeds?oldid=78868"
Community content is available under CC-BY-SA unless otherwise noted.