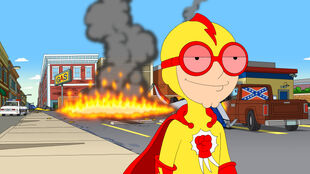 The Unbrave One
Steve tries to prove himself as a macho man to Stan.

Plot: When Stan gets into an altercation at a movie theater, he is dismayed when Steve runs for help instead of jumping in and resigns himself to believing that Steve isn't brave. Meanwhile, Francine worries about being pregnant when her period is late despite the fact that Stan had a vasectomy. Stan is even more annoyed by this news but Jeff Fischer makes him think that it may be his chance to finally get the heroic son he wanted. Dismayed that his father isn't giving him a chance and even plans on renaming him so he can name the new baby "Steve", Steve goes to Roger for advice. Roger proposes disguising Steve as a superhero and letting him perform an act of bravery, then letting Stan "accidentally" discover that Steve's timidness was a ruse. While Steve and Roger go out to buy a new camcorder to film Steve's heroics, Stan paints Steve's room in tribute to John McCain's bravery. Stan anxiously awaits the results of Francine's pregnancy tests but discovers she fell for an online hoaxer named "Dr. Vadgers". 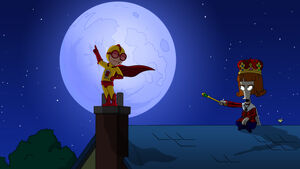 Out on the town to find crime, Steve and Roger almost strike out until they stumble across some vandals spray painting a monument. The hoods fail to be impressed and threaten to beat Steve up until Roger fires a couple of shots from his pistol in warning. Disappointed that he missed his chance to be brave, Roger assures Steve that he can edit the video to make it look like the bullies ran in terror from him and they send the edited video to Greg and Terry to show on the news. The plan actually works until Roger shows up in the suit to steal the credit from Steve in order to attend Stan's Hero's brunch. As Francine gives Steve the brush off while waiting for the results of her pregnancy test, the only guests to respond to stan's brunch are Roger, Lauren, the movie theater user who saved Stan and Sully Sullenberger, the "Hero of the Hudson." 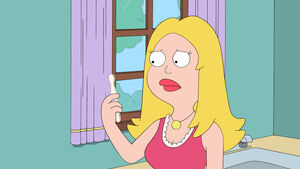 Steve stops by to tell his father that he's decided to quit worrying about what his father thinks of him and heads out, intending to ditch his hero costume. But as he's about to throw it from a bridge, he spots a car with a baby, puppy and a chick inside start to roll down a steep hill into traffic. Steve decides to don the suit one more time to rescue them just before they collide with a tanker truck. As Steve walks away from the grateful mother, she lights a cigarette, engulfing herself and everyone around in a ball of flame from the tanker. back home, video footage of Steve's rescue is seen by Stan and he realizes Roger couldn't be the masked hero. Later, Stan comes to Steve and tells him that Roger came clean and they reconnect. Francine comes in to happily announce that she got her period and isn't pregnant.

During the credits, a house is seen with lots of typing heard from inside. In the last few seconds, a close-up on a pair of hands is shown typing an e-mail signed Dr. Vadgers. The owner of the hands is Glenn Quagmire of Family Guy, who says his catch phrase, "Giggity."

Previous Episode /// The Unbrave One \\\ Next Episode

Retrieved from "https://americandad.fandom.com/wiki/The_Unbrave_One?oldid=79578"
Community content is available under CC-BY-SA unless otherwise noted.