View source
watch 02:13
'American Dad' Recap: The Two Hundred
Do you like this video?
Play Sound 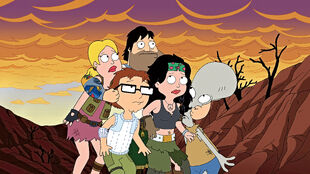 The Two Hundred
Stan finds himself trapped in a world he never made. 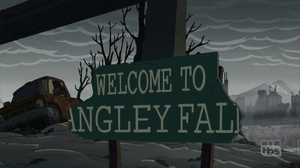 In the wasteland of Langley Falls, Stan wanders through the ruins covered in tattoos, passing warnings about "The Two Hundred." He returns to the ruins of his home, avoiding strangers until he runs into Principal Lewis scavenging in his kitchen. Stan explains that he was in South America during the “blast” and tells of his falcon tattoo. In a flashback, Stan, Klaus and Hayley go fishing and get into an argument instead of spending time together. She attempts to free the caught fish where they are eaten by falcons. Stan mentions that his tattoo is a reminder of that event. As Stan tries to turn his back, Lewis tries to eat him but he escapes and runs into Greg as Lewis chops off one of his legs for food. 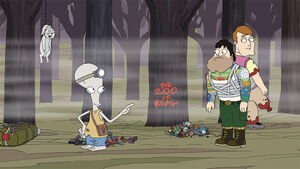 With Stan carrying Greg, he finds out that his family headed off to a "new haven" safe zone. Greg inquires about a tattoo that looks like a doily and Stan recalls a father-son "mud run" obstacle course. Due to Stan's nagging to keep up, Steve becomes injured throughout the course, ending in his leg being broken and spending his time knitting doilies. They come on a trap set by scavengers but they take off when they believe “The Two Hundred” are coming but it is really Roger fooling the rubes. He agrees to follow along to help find the family. They hop a flaming train to avoid a pack of wild dogs, thinking they lost Greg who manages to haul himself aboard. In the dark, Roger tries to avoid the tattoo discussion but Stan launches into one about a trash can after forgetting to take one out for Francine. She determinedly tries to chase down the trash truck but loses all of the trash in the process. When Greg is attacked on the train by a savage survivor, Roger tosses Stan out the train but Greg joins them again. 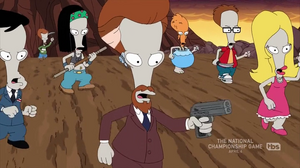 Arriving at the new haven safe zone, they find the area burnt out and believe all of the occupants to be dead. Roger finds Francine's locket just as Lewis chops off Greg's other leg. Captured and transported in a cage, Stan mentally shuts down and tells of his trip to South America and yet another tattoo. He regrets not giving his family a proper goodbye and believes they are dead and begs to be killed. Just as Lewis pulls a gun, Hayley knocks it away with a trained falcon and Steve nets Lewis in an oversized doily. But when the cart rolls away and almost goes over a cliff, both Steve and Hayley are unable to stop it. Francine adds her muscle from hauling trash cans and pulls it back from the cliff edge. Just as they think they are safe, Lewis whistles for the savage survivors of Langley Falls as two hundred clones of Roger arrive. Roger recalls a trip to Langley Quantum Labs where he wanders into a hadron collider which causes all of his personas to be released and worldwide devastation. The two groups rush toward each other, but none are friendly to the Smiths. Just in time, Jeff and a dragon-Klaus arrive to save the day as Stan tells of his last tattoo of the event to his grandchildren.