Roger: You came to the right guy, Steve. I love a good quest for revenge.
Steve: I'm not out for revenge, Roger. I am a proud lifelong good boy.

Steve: But singing was my talent. What else can I do?
Roger: One word... ventriloquy. Ventriloquism? Puppet-talkin'. One word.

Roger: I was kicked off Match Game for saying the word "queef" on air. But that's neither here nor there.

Steve: Wow, you move just like a dummy!
[Roger slaps Steve]
Roger: Now, Steve. Why do you think I slapped you? It's because you used a certain word. Do you know what that word is?
Steve: Is it...
[Roger slaps Steve again]
Roger: That's right. Never, ever call me a dummy.

Steve: Please tell me you didn't have anything to do with A.J.'s accident.
Roger: Let's just say that as far as us winning the talent show goes, the bar was just lowered.
Steve: That, uh... that's not the most convincing denial.

[Steve finds articles about Dennis being arrested for murder in Roger's scrapbook]
Steve: Wow. I really should have looked further into this book before I started this whole thing.

Dennis: Teaming up with Dudley was my first mistake. My second was having my other puppet, Mr. Doodles, represent me in my murder trial.

[Steve attempts to signal a student in the audience by blinking in Morse code]
Student: I'm in love with you too, Steve! I've always loved you!
Steve: [thinking] Oh yeah. I don't know Morse code. 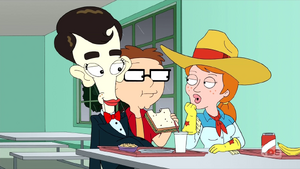 Roger: Easy there, toots, or I won't be the only wood in Steve's lap.

Roger: Hey ladies, ever see a woodpecker? Want to see mine?

Retrieved from "https://americandad.fandom.com/wiki/The_Talented_Mr._Dingleberry/Quotes?oldid=85656"
Community content is available under CC-BY-SA unless otherwise noted.