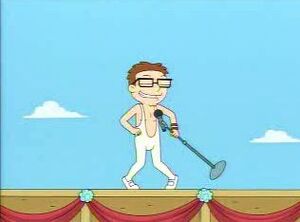 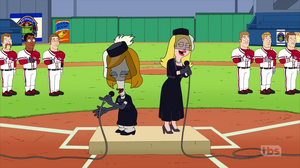 "The Star-Spangled Banner" is the national anthem of the United States of America, based on a poem written on September 13, 1814 by Francis Scott Key after witnessing the bombardment of Fort McHenry by British ships in the War of 1812.

Steve performs an improvised version of "The Star Spangled Banner" in the style of Michael Jackson at the Langley Falls Veterans Center in the episode "In Country...Club".

While pretending to be widows in "Widow's Pique", Roger and Francine sing the national anthem at Nationals Park.

Oh, say can you see by the dawn's early light

Oooo...Rockets bursting in the air...

And the home of the brave widows

Retrieved from "https://americandad.fandom.com/wiki/The_Star_Spangled_Banner?oldid=67553"
Community content is available under CC-BY-SA unless otherwise noted.