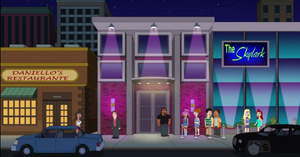 The Skylark is a nightclub where Klaus is mistaken for a valet while hanging out with Roger in "Flavortown".

Without cash or anything better to do, they go ahead and take up the job. Something odd happens when they hear Steve's voice but they decide to try to ignore it. They hear his voice again later, but soon, a voluptuous woman invites Klaus into her car. She drives away and kills them both. Roger is left with angry customers when he admits he doesn't know where their cars are, as he only bothered to park them without noting their location. He leaps to attack just as it's revealed that Steve is reading a comic book, Valet the Vanquisher.

Retrieved from "https://americandad.fandom.com/wiki/The_Skylark?oldid=81292"
Community content is available under CC-BY-SA unless otherwise noted.