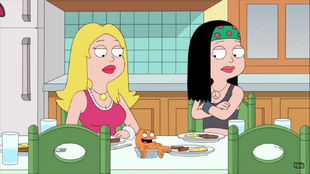 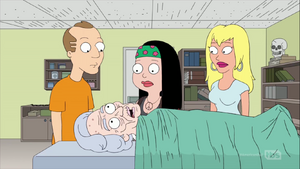 Hayley is originally repulsed when she meets Eunice, a new elderly member in one of her college classes, but she soon finds out she's quite fun to be around. When telling the family about Eunice the next morning, Francine is similarly repulsed, but Hayley hopes that she can be just like her. Klaus points out that she's already destined to become just like Francine instead, pointing out their similar habits. Hayley tries to deny it, but the evidence keeps piling up. As she desperately tries to find a way out of her fate, she suddenly realizes that Jeff is even more like her mother. She sets out to de-program him, but his issues go even further than she imagined. While meeting with Eunice and her study group, she becomes even more impressed with the life Eunice has had. She learns that both Eunice and her husband Milford left home at an early age rather than become like their parents. Returning home, she finds Francine and Jeff engaged in a musical number, which is the final straw, as she grabs Jeff and takes him from the Smith home. 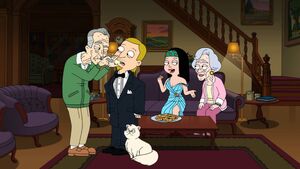 Together, they head to Eunice and Milford's home, where they are encouraged to change into their clothing to replace their rain-soaked outfits, unaware that Milford and Eunice have a secret plan to swap their brains into their younger bodies. To their frustration, Stan and Francine arrive to recover Jeff, but find themselves also trapped in the house due to the pouring rain. Seeking out the bathroom, Stan finds their secret lab, but thinks it's just a man-cave. Tired of Francine and Hayley's bickering, Eunice, who reveals herself to be Constance von Stroheim, an escaped mad scientist along with her husband Wilhelm, commands their deformed handyman Morbo to capture the pair and take them to the lab, having decided to use their bodies instead and use Jeff for their cat, while slipping Stan a pill to make him sleep. As Hayley apologizes while Constance is distracted by Morbo, Francine is able to remind her that they both share being double-jointed before the drugs knock her out. Hayley is able to use this to slip out from her shackles and knock Constance away from slicing into her mother's skull. Constance tries to send Morbo after Hayley, who reminds him of the beatings he's suffered at her hands. He instead turns on Constance and her husband, allowing Francine and Hayley to escape as Stan also recovers. As they all start to leave, Jeff scratches his ear with his leg and starts to purr. 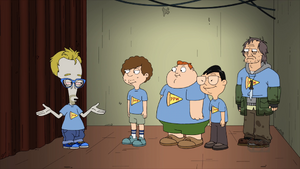 Meanwhile, Roger becomes paranoid that the members of his improv troupe want to kick him out, so he manages to steal the group away from them and auditions Steve and his friends to replace them. But when they begin to show any sign of talent that could surpass his, he gets rid of them and replaces them with vagrants until the entire group is replaced. As they start to perform their show in front of an audience consisting of mostly Steve and his friends, the vagrants remove their masks and reveal they are the original members of the troupe that Roger deposed, turning the tables and kicking him out of the group to Steve and his friends’ amusement, as Roger laments being too trusting.