For a complete script, see: "The Shrink" on the Transcripts Wiki

Dick: Even though it's adding 45 minutes each way, it's neat to take the train to lunch.

Male newlywed: Excuse me, sir. Would you mind if we took your taxi? We're a sweet, young newlywed couple and we kind of expect the world to give us things.

[After the kids recount other people's strange encounters with death]
Francine: I was buying groceries today and my coupons had somehow expired.
Stan: MADNESS! ALL IS MADNESS! GAAAA!!! [runs away]
Francine: [after a moment] They let me use them though, because I go there a lot. And they know I'll throw a fit.

Dr. Ray: Would you have felt better if this couple had, let's say, died at your hands?
Stan: Oh, so much.

[Klaus proposes that he and Roger study wine]
Roger We'll become the classiest winos in all of Langley Falls!

[Francine worries about Stan and all of the packages he gets for his new hobby]
Francine: The UPS started making jokes about it. Good jokes. I think he might want to have an affair.

[Stan drives though his model]
Stan: Hello Constable George. Hello Grocer Joe. Some would say that you're just the Constable model with a different paint job, but I know you're a separate, unique person.

[Steve decides to play with Stan's model while he things he is away]
Steve: Vroom, vroom. [assorted screeching and clanking noises] Out of the way, I'm the garbage man. Gimme your trash, ya losers. I'm in the union and my pension is bankrupting the city. Everyone talks about how rich I am but they have no idea. 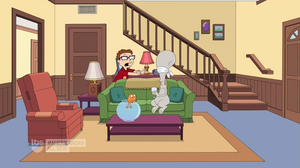 [Steve runs screaming past Klaus and a blindfolded Roger after being frightened by a miniature Stan]
Roger: What was that?
Klaus: [matter-of-factually] Eh, it's just Steve running from something terrifying.

[After Stan shrinks the family to have them join him in his model]
Stan: Oh, there are so many wonderful things I want to show you. Although your presence does introduce a host of chaotic variables. [just barely to himself as he considers his options] I may wind up having to contain you somehow.
Hayley: What's that?
Stan: [Changing his disposition and putting on a smile] For the moment, please enjoy unlimited access... [downbeat again] ...with certain limitations.

[Stan tries to convince the family to give his model world a chance]
Stan: And if you still don't like it, I'll make us big again. I'll make us a thousand feet tall if that's what you want.
Francine: Normal size would be fine.
Stan: Make up your mind.

Stan: So, are we loving it?
Francine: It's certainly...consumed you.

Francine: I'm kind of getting why you love it so much. There's everything we need here. Food, electricity, safe and fun giant ants.

[Running from the ants]
Stan: We have to get to the shrink ray, it's our only way out.
Francine: Oh, thank God you've come to your senses.
Stan: In the basement of our model house, I've built a smaller, even more miniature town. We've got to shrink one...more...time!

Stan: Whatever the world throws at me, I can use my family to block it.

Stan: Frankly, my ants, I don't give a dam! [He fails to smash the dam with the model train] Shit.

Roger: A bug-sized Stan. And yet I don't remember doing ether. But then again, that's ether's signature move.

Retrieved from "https://americandad.fandom.com/wiki/The_Shrink/Quotes?oldid=88452"
Community content is available under CC-BY-SA unless otherwise noted.