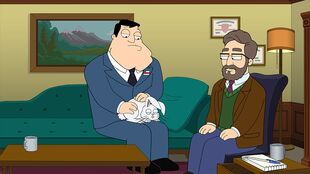 Stan and his doctor

The Shrink
After Stan has a traumatizing experience, he literally tries to lose himself in miniatures. 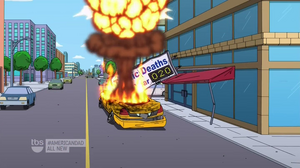 Taking the train to lunch to enjoy Italian food, Stan finds that it is running late when he needs to return and hails a cab, but gives the first one to a newlywed couple. Patting himself on the back, he sees them get crushed by a sign that is knocked off of a building. His near brush with death shakes him up so that he is unable to do his job, so Bullock makes him an appointment to see the CIA therapist, Dr. Ray. He complains to his family but their own stories provide little comfort. Consulting with the doctor, it is suggested that he try to hold a bunny but finds it has died. They try other methods without luck as well until the doctor suggests miniatures to give him back his feeling of control. Stan quickly adopts to the hobby to Francine's concern over Stan's obsession to detail and missing work. When she awakes one morning, she finds he has built an entire city, thinking that he went into work, but he has really shrank himself to enter his miniature world. 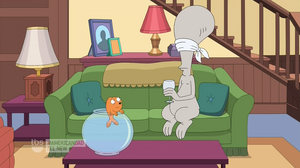 Meanwhile, Roger has a bad experience at a wine tasting thanks to Klaus and decides that they won't attend another one until Klaus suggests they actually study wine. He has Roger sample wines blindfolded, although Roger mistakes one for a glass of milk.

As Stan enjoys his plastic world, Steve enters the basement and plays with the model, accidentally picking up Stan until he yells at him, sending him running. Francine enters and Stan explains about using a CIA shrink ray to enjoy his model. Francine wants to return him to normal, but Stan pulls a fast one and shrinks her and the kids into his world, then knocks the ray off the table so they can't reach it. Stan introduces them around to the plastic figures and places, but when Roger enters to pick up a new bottle of wine, they try to get his attention without luck thanks to his headphones as he drops and breaks his wine bottle. 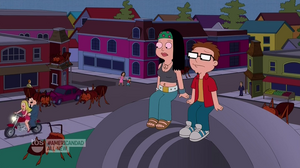 Stan continues to try to get them to enjoy his world, but as they walk away, a horde of ants enter and develop a taste for Roger's spilled wine. As Stan takes the family on a tour of his world, the ants are drawn further to the model. He takes Francine on a ride in his model train around the layout where he shows her an entire mountain of food. Things seem wonderful until Francine brings the ants to Stan's attention. They rush off the mountain to get to the shrink ray again and they find Dr. Ray has shrank himself as well to help, but is killed by the ants. Stan and Francine take off on his toy motorcycle and she talks sense into him about having family support for his problems. As Stan decides to crash the train into the model dam to flood the layout, he sends the kids off to cut the clock tower power to boost the train speed, then has Francine increase the power to the train as he sends it on its way, but almost rides to his doom until his attempt fails and is intercepted by Roger, who tells him of returning to the wine party only to catch people having a sexual affair.

He has Roger smash the dam, even though he plucks the family clear beforehand, rendering the problem solved. As Stan mourns the loss of his model and Dr. Ray, Roger decides to swallow the family.

Previous Episode /// The Shrink \\\ Next Episode