The Return of the Bling 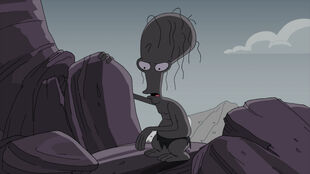 The Return of the Bling
Stan convinces Roger to return the Gold Medal that he won by cheating in the 1980 Olympics but he has a hard time giving it up.

Steve shows Stan the grade he got for writing about his hero "Legolas" from The Lord of the Rings and Stan takes him to task for not following a real-life hero. Stan shows him his display case of heroes, the 1980 US Olympic Hockey Team and Ronald Reagan. When Roger reveals that he played on the gold medal winning team as Chex LeMeneux, Stan refuses to accept it until Roger takes him to a player's reunion where he is recognized and accepted. Stan is amazed and goes into full-blown hero worship. But when Roger reveals he was on performance-enhancing steroids, Stan is appalled. He destroys his shrine to the Olympic team and is at a loss as to what to do next. He goes to see Nancy Regan to channel the spirit of Ronald Reagan and interprets the message as him needing to return the medal to the Olympic committee. Roger follows Stan and Steve onto the plane but decides to sabotage it to keep his medal. Stan takes control of the medal when Roger leaves to go to the bathroom but he actually saws off the plane's wing. When the plane crashes, Stan and Steve proceed toward the Olympic Committee headquarters while Roger descends into a Gollum-like madness.

Roger finds Stan and Steve but leads them to an all-female youth hostel. Steve is incapacitated by the charms of the girls while Olga, the owner, intoxicates Stan. Roger recovers his "precious" medal. Just as Stan is about to give up, he sees the spirit of Ronald Regan who rallies him to keep going. Stan recovers the medal and punishes Roger by throwing him in with the British tourist girls. Stan makes it to the Olympic Committee Headquarters but, just as he is about to drop the medal into the torch, Roger attacks him one last time and falls into the flames which turn out to be fake. Stan tries to give the medal back to the official but finds out no one cares because the "Miracle on Ice" was good for the committee. Stan is told that Reagan already knew about the steroids and paid off the committee to look the other way. When Steve enlightens Stan about heroes, Stan starts to speak but is attacked by Roger who bites off his finger simply because it was done in the movie.

Meanwhile, back from a mission, Reginald hangs out at the Smith house. His previously cold relationship with Hayley hits absolute zero when, in the laundry, he shrinks her dress that she wanted to use for a date with her new boyfriend Ian. Reginald offers to take her to a "Shaggy" concert but Hayley isn't impressed. At the concert, Hayley wants to leave but is jostled by a drunk punk. Reginald demands an apology but is refused and he gets medieval on the punk impressing Hayley. Later over cognac, Hayley reveals her relationship isn't all its cracked up to be. Reginald tells her she should find someone more mature. Feeling tender, Hayley starts to kiss Reginald but he stops her telling her he is already in a relationship and wouldn't feel right cheating on his girlfriend. Heading off to bed, Hayley extends an invitation to Reggie if he changes his mind.

Previous Episode /// The Return of the Bling \\\ Next Episode