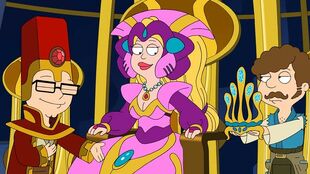 The Nova Centauris-Burgh Board Of Tourism Presents: American Dad
Francine joins in on the boys' live-action role-playing game. 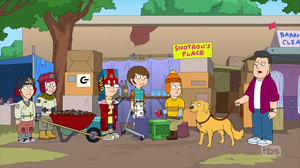 Steve is tripped by Mertz in the halls as he rushes to get to his role-playing game with his friends in a park, but they are interrupted by reality mid-game when their “dilithium crystals” receive a complaint about being dog poop.

Francine returns home with new curtains for over the sink, but finds that Stan's new shark aquarium that he confiscated from a drug lord precludes her from hanging them, as well as his having pitched the sink into the yard. Hayley heads out with Jeff for chonuts, donuts made from solid chocolate, leaving Francine behind and in charge of picking up Steve at the park. Depressed that she can't do anything she wants, Francine arrives and after they explain their live action role-playing game in that they act out their fantasy in an imaginary setting in public, she still doesn't understand. Later, she returns looking for Steve and while chatting with Snot, finds out that her imagination is the only limit in getting anything she wants. She soon becomes a princess in the game, although Steve isn't thrilled with having his mother involved since he is the mayor. She suggests a trip out for chonuts and Steve finds himself overruled. 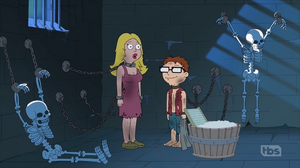 Stan demands Francine do laundry and Steve refuses to help her in hopes that she will stay out of their play, so she passes it off to Barry as part of the game and expands the game's perimeter, overruling Steve when he objects and banishes him. When a football team's game suffers from the encroachment, they burn the game setting to the ground. Francine objects, but is forced to retreat when faced with the reality that she is in an imaginary setting with a bunch of children. Back home after Stan dumps more work on Francine, Steve feels bad about her depression. He begins to talk her into a new game involving the basement as a dungeon, but she decides to take back their original game setting. She confronts the football coach and convinces him that there is room for both groups to live their dreams.

The football squad joins the fantasy as a team from outer space and gets the gamers to be their audience. A crown made from the “dilithium crystals” is made in Francine's honor as she is promoted to Queen, which she she rejects and returns to reality. 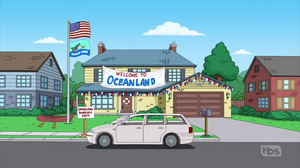 As Stan complains about the cost of feeding his shark, Roger proposes turning it into an attraction and Hayley, Klaus and Stan get on board. As Hayley works as the trainer, a fish tank features Swedish Fish, Klaus works his stand-up act as a “talking fish” and the “dolphin tank” has players from the 1984 Miami Dolphins in the swimming pool. The shark fails to impress, however, so Roger imports a vicious killer whale. During a performance, a child falls into a chum bucket and is intentionally pushed into the water by Roger. However, the whale actually saves the child to the delight of the audience. As it splashes water into the stands, they collapse, sending the audience out in ambulances. Roger reveals that in order to feed the whale, he cut corners on the construction of the stands.

Back home, Francine shatters the shark tank and hands Stan the curtains to hang, pronouncing herself Queen of the castle. Meanwhile, Hayley drives the truck with the Miami Dolphin players out to the ocean and frees them after they had been sold to a fish market to make room for the whale, as one leaps over her head à la Free Willy in celebration.

Previous Episode /// The Nova Centauris-Burgh Board Of Tourism Presents: American Dad \\\ Next Episode

Retrieved from "https://americandad.fandom.com/wiki/The_Nova_Centauris-Burgh_Board_Of_Tourism_Presents:_American_Dad?oldid=78887"
Community content is available under CC-BY-SA unless otherwise noted.