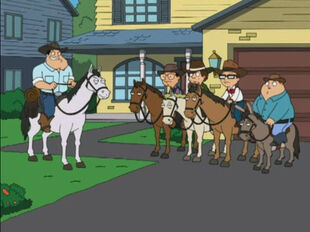 The Magnificent Steven
Stan tells Steve it's time to become a man and they live it up Cowboy style.

Plot: The episode begins with Stan on trial before a Congressional committee for some sort of crime. Stan testifies, and tells the story of what happened:

One day, when Stan goes to pick Steve and his friends up from school, he is shocked to see that their gym class consists of games involving tickling where neither team wins or loses. He is further discouraged by the fact that neither Steve nor any of his friends seem to care, and begins to worry that they will never become "men." He contemplates a way to toughen them up, and, when thinking about his heroes, he realizes what to do; he buys a small herd of cattle and makes the Smith house into a ranch, and makes the boys into cowboys.

Back on the Smith "Ranch," Stan tries to teach the boys to be cowboys, and eventually he has one of the calves killed for food; the others, however, are too horrified to eat it. Stan then decides to bring the cattle to the slaughterhouse to sell, and takes the boys and the cattle through the streets to do so. Soon after he leaves, however, some FDA agents show up, and tell Francine that the cows Stan bought were infected with mad cow disease. They race to stop them from going to slaughter.

Stan, however, has already eaten some of the beef, and begins to act delirious and crazy. The boys are unsure what to do, especially when Stan hallucinates a highway to be a river and tries to ride his horse across it. His horse balks before it goes into the road, and Stan winds up flying onto the top of a truck filled with logs. Steve rides to rescue him. However, he has to ride through a cloud of moths, one of his worst fears. He does so, however, and manages to get on top of a bridge and lasso his father. His friends help him pull Stan up, and they hogtie him. Proud of themselves for acting like "men," they go to bring the rest of the cattle to the Langley Slaughterhouse. The FDA agents arrive and try to stop them, but the boys do not listen and manage to get the cows mixed in with the other cattle there, and the infection quickly spreads.

Back at the hearing about how Stan's actions resulted in thousands of cattle having to be put down, the committee is going to find him guilty, but Steve and his friends jump to his defense, telling them that it is thanks to Stan that they learned to become men. Toshi, however, makes an impassioned plea that Stan be punished for his "twisted actions"; however, since no one understands him, they let Stan go. As the episode ends we are told that Steve quickly went back to being a disappointment to Stan, and that the town's beef supply is still very low.

Meanwhile, Roger tells Hayley that he has a crush on the cashier at his favorite liquor store, and asks that she pretend to be his girlfriend, thinking that it would make his crush jealous. The two go to the liquor store and pretend to flirt, but after they leave, Roger declares that he is now in love with Hayley instead. He begins to follow Hayley around the house and make little presents for her. Hayley seems to think little of this, finding it "cute" but not important; however, when Roger declares Hayley to be the "prettiest one in the house," Francine suddenly becomes insanely jealous.

Francine tries to seduce Roger with a more revealing dress, and succeeds in drawing his attention away from Hayley; however, Hayley soon retaliates, and, with a little pushing from Roger, a fight ensues. He winds up video taping it, and sends it into a website that exchanges mother-daughter catfights for free T-shirts. The girls are shocked, and realize that Roger was never attracted to either of them. He then mocks them, saying that he is actually the prettiest one in the house.