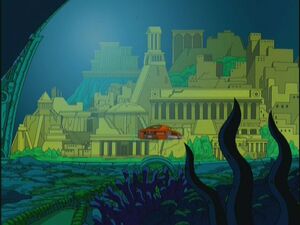 Atlantis is a legendary island first mentioned in Plato's dialogues Timaeus and Critias.

In Plato's account, Atlantis was a naval power lying "in front of the Pillars of Hercules" that conquered many parts of Western Europe and Africa 9,000 years before the time of Solon, or approximately 9600 BC. After a failed attempt to invade Athens, Atlantis sank into the ocean "in a single day and night of misfortune".

In "Irregarding Steve", terrorists kill everyone except Francine and Klaus. Klaus manages to save her and reveals his true name to be Professor Max Hammer, where he takes her to a secret room where scientists give him a sleek car and fit him with a robotic body. After escaping Mexican vampires, Klaus drives the sports car into the ocean, where it transforms into a submarine and they discover The Lost City of Atlantis, and Francine suddenly turns herself into a large-breasted mermaid. Klaus and Francine move in to kiss, but it is revealed to be Klaus' daydream.

Retrieved from "https://americandad.fandom.com/wiki/The_Lost_City_of_Atlantis?oldid=35112"
Community content is available under CC-BY-SA unless otherwise noted.